This week, we feature a player who became a professional in 1994, spent 10 years on the pro tour and is still regarded as one of the most respected players in the country having represented his country on many occasions. Here is an in-depth look into life on and off the table with Wayne Brown. 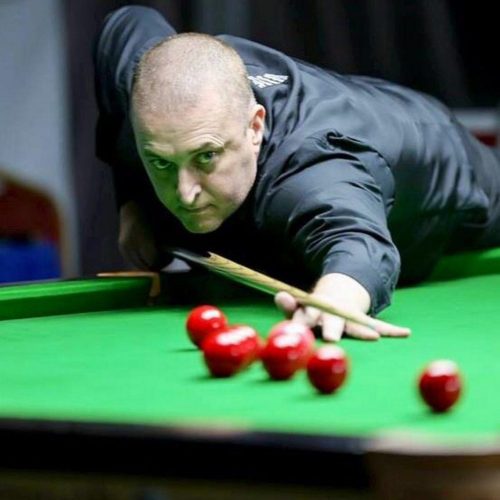 I’ve represented England playing in the World and European Amateur Championships since 2014 where we have lost in the final a few times.

Numerous Pro-Ams up and down the country

Favourite Film: Any of the Jason Bourne series

Highest Tournament Break:
I made a 145 break in the B&H Championship v Joe Perry – in normal circumstances that would probably be difficult to beat but someone beat it with a maximum 147 !!!

What would be your chosen ‘walk-on’ music? ‘Dare’ by Gorrilaz – very upbeat from the start and makes me feel good.

Which player inspired you ? Watching Jimmy White during his heyday in the 1980’s

What is your best ever achievement?
Winning the Pontins Open in 1994….I beat Greame Dott in the final, with 484 entries it was widely regarded as the toughest pro-am to win on the circuit.

Who is the toughest opponent you have ever played?
During my time as a Pro, I played Ken Doherty three or four times and he ‘schooled me’ every single time.

Who is/was your favourite snooker player to watch?
Zhao Xintong – I first saw him in 2014 at the World Amateurs in India and he reminded me of a young Jimmy White. I think he has a great future in the game and hope he wins multiple ranking events.

Funny Story to Tell?
In 1999, I was due to play James Wattana in the last 48 of the UK Championship in Bournemouth. The night before the match, myself and my manager spent the night in a jail cell in Salisbury after the police stopped the car and claimed we had false registration plates. We were released the following morning and I went on to win 9-6 which set me up to play Ronnie O’Sullivan live on TV where I was a ‘distant second’

And Finally…..
If you were playing in the World Final at The Crucible, apart from your family, which 3 celebrities would you invite as your special guests ?
Bill Shankly, Stephen Fry, Eric Morecambe