In this penultimate profile of the series which concludes this weekend, we feature a player who has been a Professional since 2012 and was part of England’s successful European Championship team during the same year. Before becoming a pro, he was very successful on the local amateur scene including winning the Merseyside Open on four successive occasions, which has only been bettered by one other player. He is currently preparing for his opening qualifying match for this years World Championships in Sheffield where he’s looking forward to a decent run. Here’s an insight into Wirral’s very own Robbie Williams. 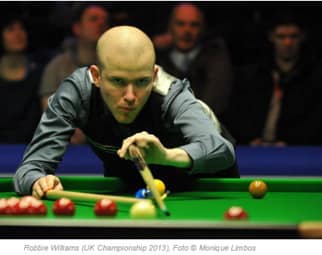 INDIVIDUAL HONOURS
Merseyside Open Champion
2007, 2008, 2009, 2010
Paul Hunter English Open Winner
2010
Indian Open Semi Finalist
2013
Pontins U21 Series Champion
2007
Age: 33
Nickname: Rob Walker gave me a nickname but it’s a bit cringey to be honest, I can’t bring myself to mention it!!
Favourite Football team: Liverpool FC
Best sporting moments outside snooker: ISTANBUL – Liverpool winning the Champions League in 2005, and now winning the Premier League
Favourite places to visit: Amsterdam and Bruges
Favourite music: Alt-J , most 80s music really
Favourite film: Kill Bill Vol.1
Favourite actor: Jim Carrey or Tom Hanks – Class actors
Favourite food: Anything Italian
Highest tournament break: 144 – I did this at 2009 PIOS Event
Highest Ranking : 47 (2017)
Favourite venue to play:
Tempodrom, Berlin or The Crucible. Both venues are fantastic to play so too close to call.
Which player inspired you? Stephen Hendry
What is your proudest moment in snooker?
Turning Professional in 2012 after qualifying at Q-School – I beat Mitchell Mann 4-3 and remember I hit a 102 break in the deciding frame.
Who is the toughest opponent you have ever played?
Mark Selby, as tough as they come.
Who is your roommate on tour?
I always prefer to stay on my own.
What would be your chosen ‘walk-on’ song?
‘Feelin’ – The La’s
And finally…..
If you could invite three top celebrities to dinner, who would they be?
Jürgen Klopp, Stephen Fry and Ricky Gervais