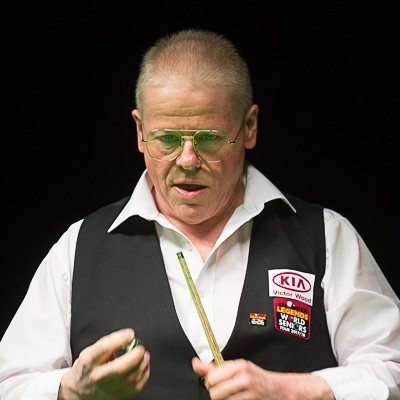 In Week 5 of our ‘Mersey Legends’ series, we feature one of the most popular players, not just in Merseyside but the whole snooker fraternity, Les Dodd.

Lots of Pro-Ams but more importantly……I also won an episode of Big Break.

Football Team:
I have to say BOTH Liverpool and Everton – have to be very careful as I had mates in both teams.

Best Sporting Moment Outside Snooker:
Scoring 2 goals in the Final at Haig Avenue 1965 for Crossen’s School – we won 4-2

My First Century Break:
Playing my friend John Hames at Smedley, I had a 112 total clearance for just 50p

Favourite Venue:
The Crucible – I was lucky enough to play there three times in 1983, 1993 and 1994, an unbelievable and electric atmosphere, you felt like you could touch the crowd.

Players That Inspired Me:
My Dad (Les) first of all then my great friend Ray Reardon gave me a lot of good advice (get a day job) then and I’m sorry to name drop all the time but these are all very good mates Stephen Hendry, John Higgins and of course the genius himself, Ronnie O’Sullivan….just to watch them all was unbelievable.

Proudest Moment In Snooker:
Reaching the Final of The Tolly Ales English Professional Snooker Championship 1987 where I lost 9-5 to Tony Meo but received a £12,500 runners – up prize m…after the presentation me and my Dad opened the envelope to look at the cheque and it wasn’t there, so we ran to the tournament office only to be told they never put the cheque inside the envelope but paid it into bank…….PANIC OVER!!

My Toughest Opponent:
Steve Davis – I played him three times during one season – he LOVED playing me ha ha! But I did gain revenge on him at Pontins with about 50 people watching, I beat him 14-0 and gave him an 11 start, he was even swearing at me at one stage…..but it was at TABLE TENNIS….my second love after snooker

Room Mate On Tour:
Danny Fowler (Dustbin Danny) from Worksop – he didn’t like losing money (we always went halfs on all gambling bets) – one day at Norbreck Castle where we played all the Qualifiers we were watching the monitors that just showed the scores of each frames going on, one table had a respotted black so I said to a guy from London let’s have £50 on who wins the toss, obviously you couldn’t see the players but who ever lost the toss went first, I lost that bet my man went first so then we had £50 on who potted black, lost that one as well, £100 down….not happy especially Danny….but a guy from London was laughing so I said come on lucky double or straight on toss of a coin, he said ‘heads’ and he was right £200 gone in about 8 mins, can’t tell you what Danny said to me but I bought the food that night !!

My Walk On Song:
You have to listen to this to appreciate why i would choose this
I DON’T LOOK GOOD NAKED ANYMORE – by The Snake Oil Willie Band

My Best Seniors Moment:
Well it has to be winning the first Over 40’s Tornament held at The Crucible Club in Newbury – £500 for the Winner only ( but i said to my Finalist opponent did he want to do a saver so we did ) and low and behold a very emotional moment in my snooker career, and at the nice young age of 64, I won it with a lot of good players in it from the good old days, many that were only just 40 and don’t need glasses like me. I want to say a big thank you to Jason Francis for organising these Tournaments which are now held all over the World.

3 Celebrities I Would Invite To Dinner:
Liam Neilson – get him to phone a few of my friends
John McEnroe – only if he could be serious for a change
Donald Trump – because everytime he talks he makes you laugh

My first game of snooker came at the age of just eight years, my Dad took the family to a caravan park in Blackpool where he sneaked me in to the snooker room. My family emigrated to Australia but we returned after two and a half years, and at the age of fourteen, I ‘stupidly’ decided that snooker was better than school, I absolutely loved the game, I still do!!

A great friend of mine Danny Lenehan, who was also a very good player, helped me improve my game and entered me into the Liverpool Juniors Championship, which was played at the Albert Pub in Aigburth at the time, I was lucky enough to win it two years on the trot, and lost out in the final the following year even though I was just out of hospital folllwing an operation on my arm, but I received special permission to play. From that day, I just carried on playing as much as possible, and like a lot of players at that time, I found that playing for money added a lot more excitement to the game. I was able to win many tournaments including a lot on Merseyside and the North West (regularly competing against one of the best players ever, George Scott), making lots of great friends and memories on the way.

I held several jobs, including the Civil Service at Smedley in Southport. I represented Merseyside at county level after winning local area knockouts and progressed to the Final knockout stage in Manchester before the main finals which were held In London, where I won that against some very good Scottish International’s and did the same the following year.

I was the Civil Service Champion of England two years in succession. I left the Civil Service to become a Taxi driver which enabled me to play snooker whenever I wanted. After every final in London, the winner got the chance to compete against an invited Professional, the first year I played Jackie Rae, a truly great character and his trick shots were brilliant. I beat Jackie 4-2 and the next year I played some young kid with ginger hair…I had two ninety odd breaks against him and lost 4-2…..I returned to work whereas this young kid went on to win an incredible SIX World Championships…..it was the ‘nugget’ himself…..Steve Davis! I never really thought about being a professional until players that I was regularly beating turned Pro, so I applied and received a letter back from World Snooker stating that although my record was outstanding, I hadn’t entered any tournaments in London and hadn’t yet been picked to represent England as an Amateur….so off to London I went and entered ten pro-am tournaments, winning six and lost to Neal Foulds in another final. I received a letter asking me to represent England in the Home International’s at Prestatyn, and did so with great pride….England won!!

World Snooker finally accepted me and I received four very nice phone calls which I will never forget, from Mr Ray Reardon / Terry Griffiths / Dennis Taylor and the great WT Willie Thorne all congratulating me, which was very nice of them. I turned professional in 1981 and held a place in the top 50 for the next eighteen years, my best world ranking was 33, with one competition remaining I got beat and finished at No38. It was a tough way to earn a living (I should should have been a Postman as they got paid every week) but in all seriousness, I’ve been very lucky and even more so now because I keep getting return bookings to perform exhibition’s around the country. I think they like my trick shots but I can still knock in tons for fun, it’s just the long shots are a bit tougher now. 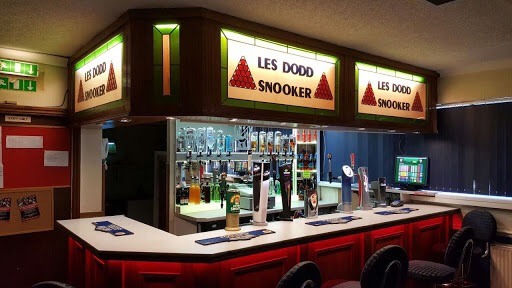