In Week 4, We continue our series of ‘Mersey Legends’ this week with a player who has won many titles and was a Professional between 1995-2000. Here is an in-depth insight into John Whitty, still regarded as probably the best left handed player to come out of Merseyside. 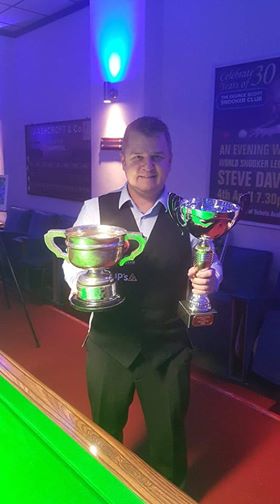 Plus winning a few Pro-Ams around the country…

Highest Tournament Break:
145 – I remember it being at a Pro-Am against Chris Norbury in Belle Vue, Manchester, but the year escapes me!!

Which player inspired you ?
John Parrott

Have you ever represented your country ?
Had some very proud moments including the following:
England Junior Team: 1994
England senior team 2013

What is your best ever achievement?
I reached the last 64 of the UK Championship in 1998 where I lost to Andy Hicks (9-6); Making back-to-back total clearances of 141 and 136 in the English Amateur Championship in 2016, still not sure if that’s ever been done by anyone else in that competition!

Who are the toughest opponents you have ever played?
Paul Hunter (RIP) and Graeme Dott.

Who is/was your favourite snooker player to watch? Jimmy White and Ronnie O’Sullivan, but I also love John Higgins as he is the total match player.

Being a fan of horse racing, what’s the greatest horse you’ve ever seen?Kauto Star, a truly unbelievable horse. It won two Cheltenham Gold Cups in 2007 and 2009, also the King George VI on five occasions and Betfair Chase an incredible four times, and win at so many different distances…Pure class!

And Finally…..
If you were playing in the World Final at The Crucible, apart from your family, which 3 celebrities would you invite as your special guests ?
I’m gonna be cheeky and have FOUR guests – Kenny Dalglish, Steven Gerrard, A.P McCoy and Richard Johnson.