This week in our series of Mersey Legends, we feature a player who has reached the very top of his sport by winning nine ranking titles including the ultimate pinnacle of becoming World Snooker Champion in 1991. After learning his craft in Liverpool at a young age, he became Liverpool’s most successful player ever, and is a true legend of the game. He was a captain on BBC Question of Sport for six years, as well as being a horse racing pundit. Nowadays he can be seen and heard on TV during the three major championships on the BBC as one of the games top analysts and has recently enjoyed time competing on the Seniors Tour, as well as performing very entertaining exhibition evenings around the country. In 1996, he was awarded the MBE for his fantastic charity work on Merseyside of which he continues to do with pride. In 2008, he launched his own successful cue sports company who have since been a sponsor of Merseyside’s successful National winning county side. 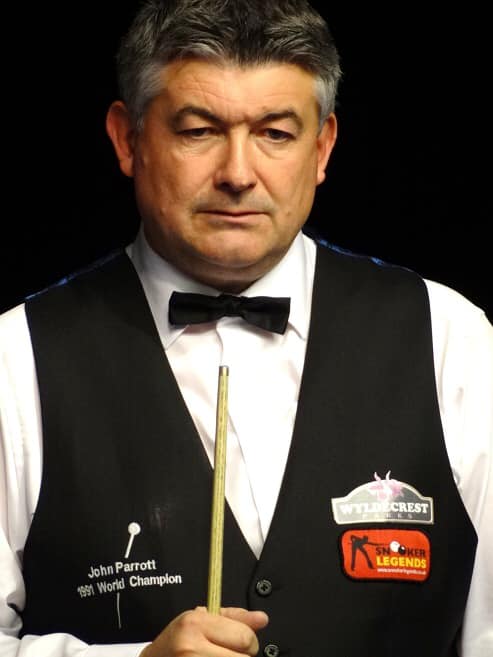 Q. Who is/was your favourite snooker player to watch?

A. Ray Reardon was my Dad’s favourite player and became mine so we’d get tickets when he played locally. A wonderful tactician and outstanding match player – six world titles tell you that !

Q. As an Everton fan, what was your first ever match you attended and who is your favourite ever Everton player?

A. I can’t really remember my first Everton game as I was only 6 – but at that time I had the Alan Ball white boots. If I don’t say Big Dunc (as he’s my brother in law) as my favourite player I’ll be in deep trouble !

Q. Who was your toughest ever opponent both as a professional and locally as a youngster?

A. Steve Davis was always the benchmark. If you overcame him you’d played properly. I once played him at the UK Championship when I was on the up, I’d played the best I ever had and still lost 9-5! I thought ‘how do you beat that’…As a junior, the national finals were the toughest and Neal Foulds /Dean Reynolds were a bit ahead of me in their development. (So I went to school !!!)

Q. Who was your inspiration as a kid?

A. My Dad was an inspiration to me as he gave me all the backing and encouragement. He was very astute in giving me practice routines that tested me. I mean, who at that time was blocking top pockets off with beer mats so the black would only go in one pocket and you’d have to move the cueball properly ! It made me think and suss things out quicker.

Q. What music do you listen to when you relax / favourite band or artist?

A. I’m a big music fan and love a broad spectrum of stuff now. In the 80s, I was a soul and funk man.

Q. How old were you when you hit your first century break?

A. I was a late developer on the century front. I was sixteen before my first one. I actually made 3 x 98 breaks and a 99 before the elusive ton. Still one of my favourite moments was hitting a league record 129 clearance at the Dudley Institute in a match versus Queen Elizabeth. The trophy from the Garston League is still in my snooker room at home.

Q. Outside snooker, what is the greatest sporting moment you have ever seen?

A. I’m a massive sports fan so picking one alone is impossible but it was very special at Goodison the night we beat Bayern Munich in the Cup Winners Cup semi final. Never heard an atmosphere like it since.

Q. If there was one race horse you would have loved to own, what would it be?

A. If you’re a local boy and you know what the National means it would have to be Red Rum. What a horse round Aintree he was!! 5 runs – 3 wins and 2 seconds ! His win in 1977 in front of that crowd who had all backed him is one of the sports greatest ever moments.

Q. What is your favourite type of food/ drink?

A. You can never go wrong in a good Italian restaurant and if I have the odd drink its Rioja for wine or Gin and Tonic for spirit

Q. What is the best cue you have ever had?

A. The cue I won the World Championships with- No contest. It was made by Will Hunt in London. Jimmy White actually recommended him and I went to see him. There was a beautiful cue in the rack he’d made for someone else which I loved. The new owner however failed to turn up and pay for it so when I went to play at Wembley the cue ended up being delivered by Will who said he’d adjusted it to my specifications. The first tournament with it I reached the Irish Masters final and the second I won the World Champs with it. Jimmy probably regrets telling me now !!! It was heartbreaking to have it stolen from my car at a Heathrow hotel and despite a £10,000 reward being offered I never saw it again. It still hurts to this day as it was truly perfect that piece of wood.

Q. Where is your favourite place you have visited?

A. Mauritius in the Indian Ocean is my favourite destination. Lovely people, beautiful beaches and great golf courses.

Q. What would be your ‘walk on’ music for a match?

A. My walk on music for the Seniors Tour is Z cars ! Cant think why ?

Q. What is your best achievement on a golf course?

A. I’m currently off a 3 handicap and love my golf with a passion. A couple of good days stand out. I played at Windermere a few years ago and shot 61 (par 67) but i won a Blue Medal comp at my home course last year off the back sticks (7,050 yards) against all the young flat bellies off plus handicaps. Not bad for an oldie at 55!

Q. Can you name your greatest Everton starting eleven?

A. Its not easy to pick my all time Everton 11 but I’d settle for Howard Kendalls 1980s squad. Going home and away watching them from 84-87 was brilliant and I’m still pals with some of them. Graeme Sharp played snooker on the next table to me at the Golden Leisure club off London Road nearly every day after training ! Made you proud that team did. Loved em !