We complete our series with one of the most successful and respected players, not only on Merseyside but on the main circuit for many years until he sadly passed away in 1998. He was a professional from 1982-1995 who at one point reached as high as 37 in the World Rankings at the age of 53, and won many titles as an amateur at both snooker and billiards, including winning the Merseyside Open Snooker Championship an incredible THIRTEEN times, a feat that will most probably never be beaten. We asked his son Geoff to give us an insight into the life of George Scott, a player with a lasting legacy on the Merseyside snooker scene. 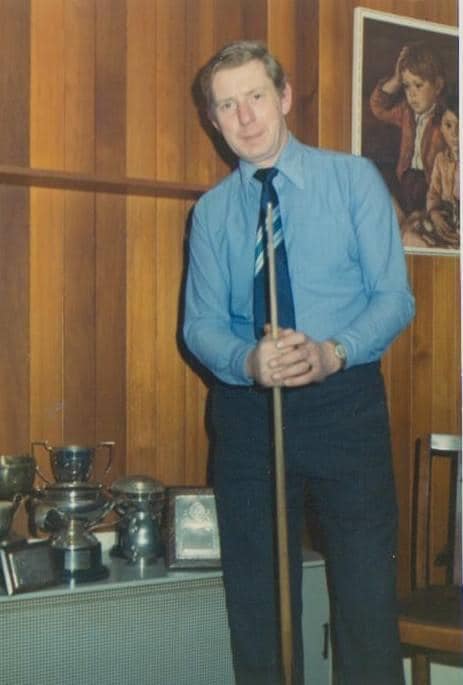 GEORGE SCOTT (1928-98)
George was self-taught, he started playing as a small boy standing on a beer crate in a working men’s club which was run by his Dad and later learned his trade in the local snooker clubs – and especially hustling. George always enjoyed a gamble on Billiards and Snooker – even to the end he used to play Sid Lane most Afternoons at Billiards for a £1…..He loved going over to Pot Shots Snooker Club in Manchester to play with the likes Paul Madati and John Virgo in the late 1970s – gambling included of course!!
ROLL OF HONOUR
Merseyside Open Champion
1951, 1955, 1956, 1959, 1960, 1961, 1962, 1963, 1966, 1968, 1969, 1970, 1977
Merseyside Champion of Champions
1966, 1967, 1968, 1969, 1970, 1977, 1980
North West Open Champion
1967
Last 16 – Canadian Open (lost to Steve Davis)
Nickname: “Scotty”
Football team: Everton FC
Favourite sporting moments outside snooker:
Grand National and watching his beloved Everton
Favourite Places to visit: Loved Touring America
Music: The Swinging Sixties
Film: All westerns
Actor: John Wayne, Clint Eastwood
Food: Chinese
Drink: “Macky Mild” also Black & Tan later on (Guinness & Mild)
Venue: Possibly the Albert Hotel in Lark Lane where all his finals where played.
Inspired by: Walter Lindrum and Joe Davis
Walk on music: None – he would have been mortified
Best ever achievement:
Staying Married to Vi because he was out every night playing Snooker. Opening his own snooker club was also a dream made true in 1983. Playing for England was his best personal achievement playing the game he loved…..
Toughest opponent: Probably Steve Davis
Favourite player to watch: Cliff Wilson – but loved watching everyone – snooker was his life!!
If George reached the World Snooker Final at The Crucible, apart from his family, which three celebrities would he possibly invite?
None – he wasn’t impressed by celebrities!!