This week we feature Merseyside’s most decorated cueman. Not only has he won Merseyside’s most prestigious snooker titles, he has also amassed numerous International honours on the pool circuit, including becoming World Champion. Locally, he has notched up an incredible 74 century breaks in both the Ormskirk and Southport leagues since 1990, winning over 50 individual titles in the Southport league alone which included a clean sweep in 2008. He has been involved in Ormskirk’s regular successful Inter-league team, which includes a national title, as well as being a valuable member of Merseyside’s County A side, winning the National title three times. He remains to this day one of the most respected players on the circuit which he cemented in style by winning this years Merseyside Champion of Champions for the third time. Here is an in-depth insight into life on and off the table for the one and only Gareth Hibbott. 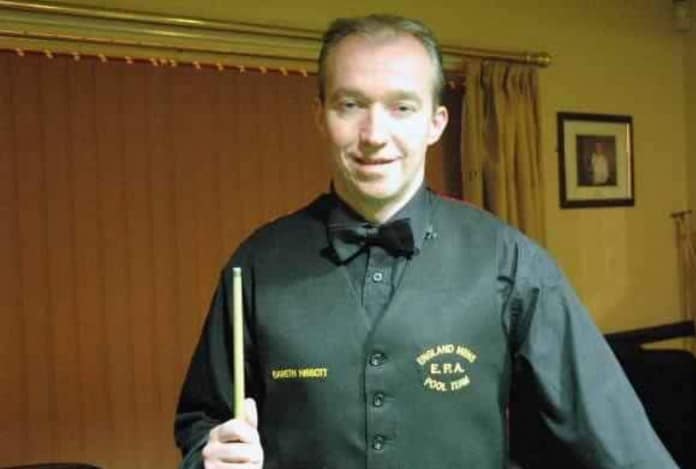 SNOOKER HONOURS
Merseyside Champion of Champions
1994, 2015, 2020
Merseyside Open Champion
2016
Ormskirk Champion x 6 times
Southport Champion x 19 times
INTERNATIONAL POOL HONOURS
2014 Scottish Professional Champion
2016 British Open Champion
2016 English Open Champion
2016 World Professional Champion
2016 World Series NI Champion
2017 World Seniors Champion
Age: 51
Nickname: “God”
I get called this by some snooker and pool players in Southport!! Think its a bit over the top though !
Favourite Football Team: Man Utd.. Sorry Merseyside teammates!
Best Sporting moment outside snooker:
Would have to be World Pool Champion in 2016, outside cuesports I have twice been Southport darts champion- think I’ve spent too much time in pubs!
Favourite Places to visit: Lake District in UK and Amsterdam
Favourite Band/Artist: 90s music.
Favourite Film: Back To The Future
Favourite Food: Roast dinner
Favourite Drink: Kronenbourg
Highest Tournament Break: 141 – I did that in the Southport Championship Final v Paddy Tyndall
First 100 Break:
Think I had a couple on a kids table in my house but probably when I was 17 or 18 on a full size table
Favourite Venue to play:
The main table at the Gloucester Academy was probably the best arena, also played a couple of warm up frames at Southport Theatre when the old Matchroom league came to town.
A subsequent funny story is that one of these warm up frames was against Ronnie O’Sullivan just before he turned pro, Barry Hearns idea was for for him to play these frames to get used to the arenas and crowds. The main match was Stephen Hendry v Tony Drago and the audience knew nothing of this warm up frame, so me and Ronnie were just off stage waiting to go on in a dark corridor when out of nowhere there’s 40/50 people queuing up for MY autograph! They could just see a skinny lad with a cue, they thought it was Hendry waiting to go on…
Ronnie was stood just three yards away with nobody interested, looking at these 50 people, mainly young girls and women wanting my autograph. Bet he was thinking who’s this #### must be a local celebrity…..
What music would you use as a ‘walk-on’ ?
Lucky You by Lightning Seeds- try to tempt fate a bit of luck always helps!
Which player inspired you ?
Jimmy White was my favourite player growing up.
What is your best ever achievement in snooker or pool?
Winning World and European pool titles at singles and doubles in 8 ball – also SIX World Team cups when playing for England. In snooker, it would have be the consecutive 147’s against John Roberts just over a year ago. From what I’ve been told, I believe its only been done maybe 12 to 15 times ever in the game, the second maximum was from John’s break off shot so there was no shots in between for me which makes it even rarer.
Who is the toughest opponent you have ever played?
For people I’ve played regularly I would probably say John Wade – we’ve had lots of close games and
deciders in big matches with plenty of people watching.
Who is/was your favourite snooker player to watch?
Alex Higgins when I first watched snooker but these days it’s Judd Trump.!
And Finally…..
If you were playing in the World Final at The Crucible, apart from your family, which three celebrities would you invite as your special guests ?
George Best, Gazza and Alex Higgins – wake up with a bad head and realise you’ve spent all the prize money!